Honored around the globe, eagles have inspired man for centuries as seen in art, literature, and religious and government symbols. In 1782, the United States chose the bald eagle as its national symbol. The bald eagle is also known for its rapid population decline in the 1960’s and its recovery through breeding and reintroduction programs.

However, along with success came a new problem, a rise in human-eagle conflicts. Many of these incidents produced permanently displaced and disabled eagles that had nowhere to go. Loretta Jones, founder and executive director, felt a moral obligation to help our national symbol by using her talents and facility, and so Walk With The Eagles™ came to life.

Walk with The Eagles™ 2001-2018 was a unique program that allowed visitors to safely cross the threshold into the eagles’ world, and to experience these magnificent creatures face-to-face. A once in a lifetime chance for visitors to share the magic and passion and look deep into the eyes of an eagle.

The Walk with Eagles Project may look different now since the Center moved to its new location, but its goal of conserving eagles has not wavered. We are honored to partner with Sia, the Comanche Nation Ethno-ornithological Initiative, who are leading eagle conservationists in the world. Through this partnership Hawk Creek has been increasing the impact of our eagle conservation program. While our work with eagles began with North America’s native Bald and Golden Eagles the addition of several rare and unique non-native eagles has been instrumental in educating people about the plight of eagles worldwide.

Thakan is a male Martial Eagle, the largest species of eagle in Africa and is listed as endangered. He is here to be an ambassador for his declining species & to promote worldwide eagle conservation. Several organizations are working together to import females for the small number of bachelor males already in the U.S. but this cannot occur until the South African export ban is lifted. We hope to eventually find his soul mate so that he can contribute to his species’ numbers.

Onyx, the Verreaux’s Eagle, is one of the first of his species to be hatched in the western hemisphere. With fewer than 10 of these birds in the US he is an important and unique ambassador for eagle conservation and people from around the globe have been following his development via social media.

Onyx was sent to the Center from Sia at 4 weeks old. His parents had rejected him so he was raised by foster golden eagles. First this little ball of fluff was like all nestlings, he slept a lot, ate a lot and you guessed it, pooped a lot. At this age Onyx traveled with his trainer everywhere in his “nest”. He went to “eagle school” to spend time near the golden eagles and bateleur eagle. Soon he was hopping out of his nest and exercising his wings—he had entered the toddler stage and was unstoppable! Now he could follow his “step brothers,” Eurasian Eagle Owlets, around the yard, office, house and in their quest to claim all of the dog’s toys as their own. As Onyx grew he spent his days in an outdoor enclosure, hopping back into his nest when he knew it was time to go home and work on stepping to the glove and watching Netflix. His trainer knew his days of coming home at night were numbered as he began to get lift. He let us know when that day arrived when he flew to his trainer’s bed demanding breakfast!

Onyx has grown into a confident and robust eagle. He has taught us so much and we look forward to sharing his many adventures with his fans!

Hawk Creek is thrilled to announce that we welcomed a very special breeding pair to our avian conservation program, Kenya and Tsavo, the Bateleur Eagles. Propagation of these birds is vital to the survival of their endangered species. We are honored to once again be working with our good friends and leading eagle conservationists, Sia, on the journey to help this incredible species. Through these cooperative partnerships the Center is able to expand our conservation work globally. To date we have been unable to locate any other breeding pairs of Bateleur Eagles in the country as they are notoriously difficult to breed in captivity and many of the resident Bateleurs are of advanced age. Our goals for this project are to encourage these birds to breed and raise their young which can then become part of other projects to further propagate this imperiled species as well as to become educational ambassadors to educate people on Bateleurs and how all of us can work together to help this colorful bird win its fight against extinction in its native Africa. We can only hope that it is enough, otherwise reintroduction projects will be required and the current captive population is not robust enough to repopulate the wild. We look forward to sharing this journey with you!

Never say never – this is a lesson taught with utmost clarity when working at Hawk Creek. Most of the staff that has worked here awhile is hardly ever “surprised” at unexpected occurrences. Even our most unflappable staff however was struck speechless in May 2011 when our two resident golden eagles, Cherokee and Canyon, produced an eaglet. At the time Cherokee was already over 40 years old!

The staff was speechless upon discovering the tiny chick, and many were moved to tears. We witnessed the formidable Cherokee gently feeding the chick the tiniest pieces of meat and balling up her powerful talons to avoid accidentally hurting the chick as she walked. Canyon diligently protected his family and brought them food, however Cherokee decided he wasn’t allowed to sit on the chick to keep it warm so he was only allowed to perform guard duty and nest construction.

Even though Cherokee and Canyon can no longer fly wild due to their injuries, their chick, Legacy, was released on January 15, 2012 in St Louis, MO in partnership with World Bird Sanctuary to soar free across our skies.

In 2012 Cherokee and Canyon once again produced a chick, this time a male named Heritage. The USFWS did not want this eagle to be released so he now lives with our friends at Sia.

After Cherokee’s passing in 2018, Canyon was given a new companion, Apache. These two birds will continue to educate people on the dangers facing Golden Eagles here in the US as well as around the world.

Few animals are as iconic as the Bald Eagle. Hawk Creek is home to two Bald Eagles, One Wing and Gryphon. One Wing, who was Hawk Creek’s first eagle resident back in 1991, suffered a wing injury after she was shot. She was joined by Gryphon in 2015 who was injured by discarded fishing line. Unfortunately for Gryphon the filament wrapped around his feet and wings causing him to lose a toe and the ability to fly. These ambassadors have powerful stories to share about man’s impact on wildlife and that even our national symbol needs help in today’s modern world. 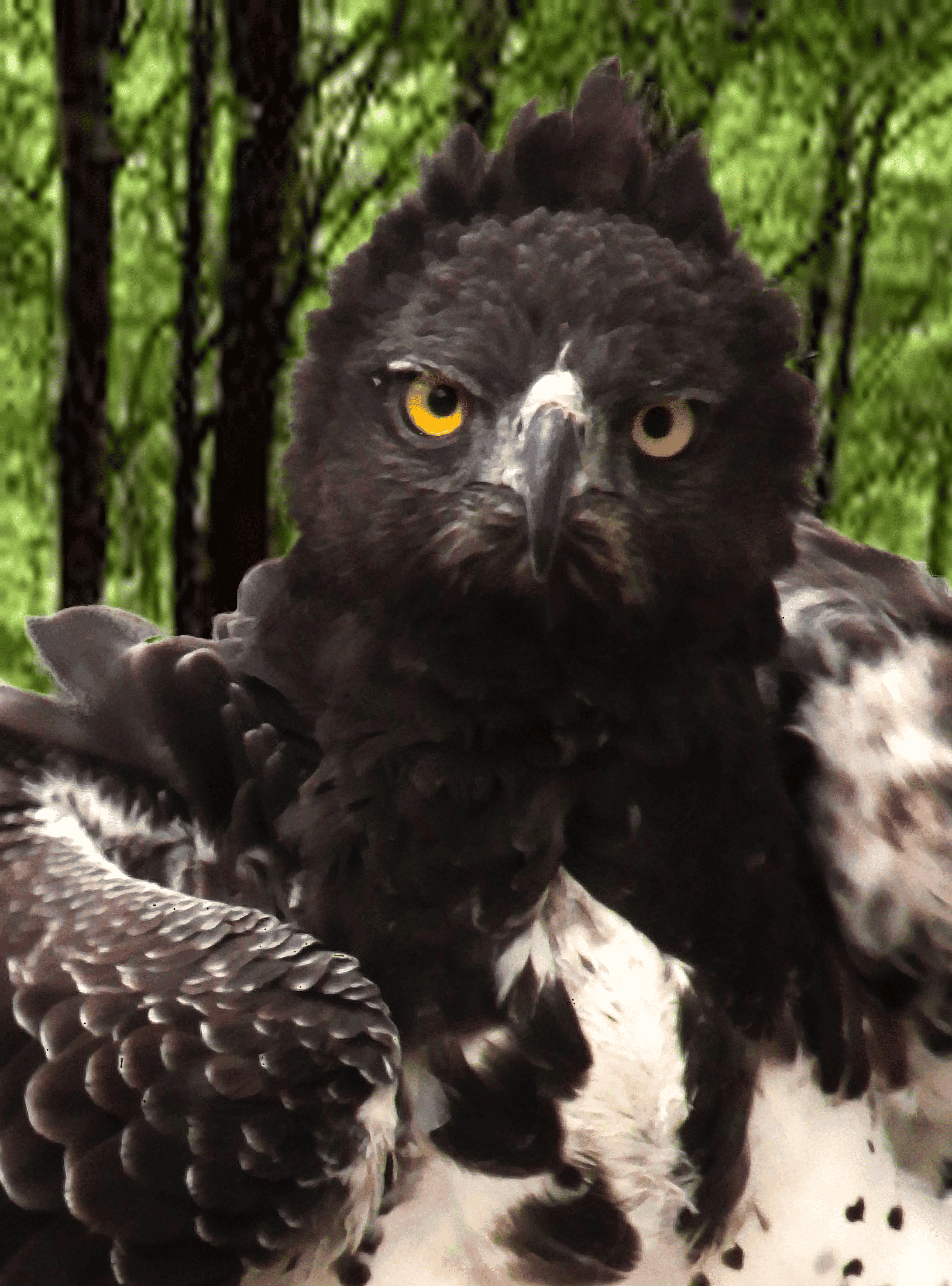 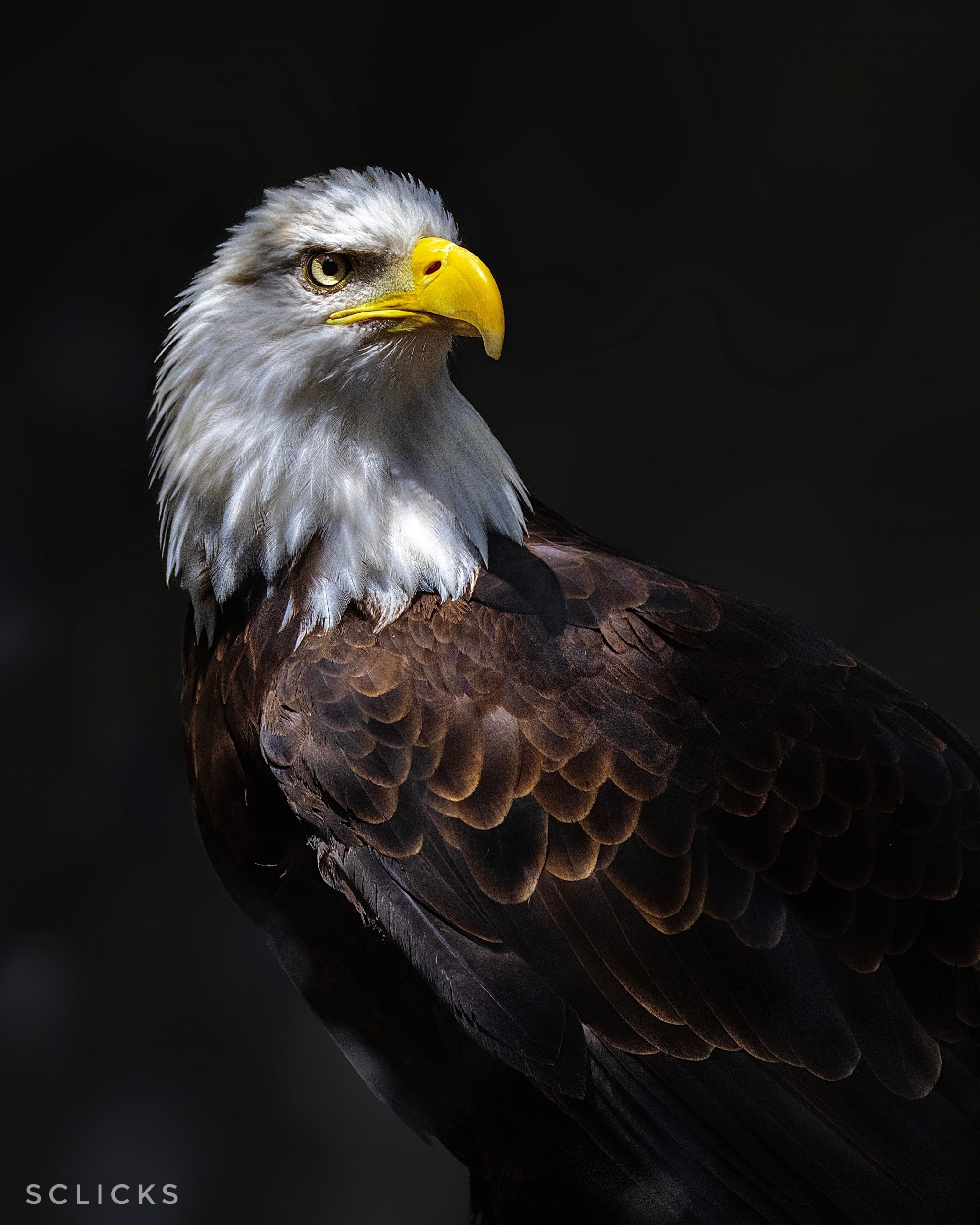 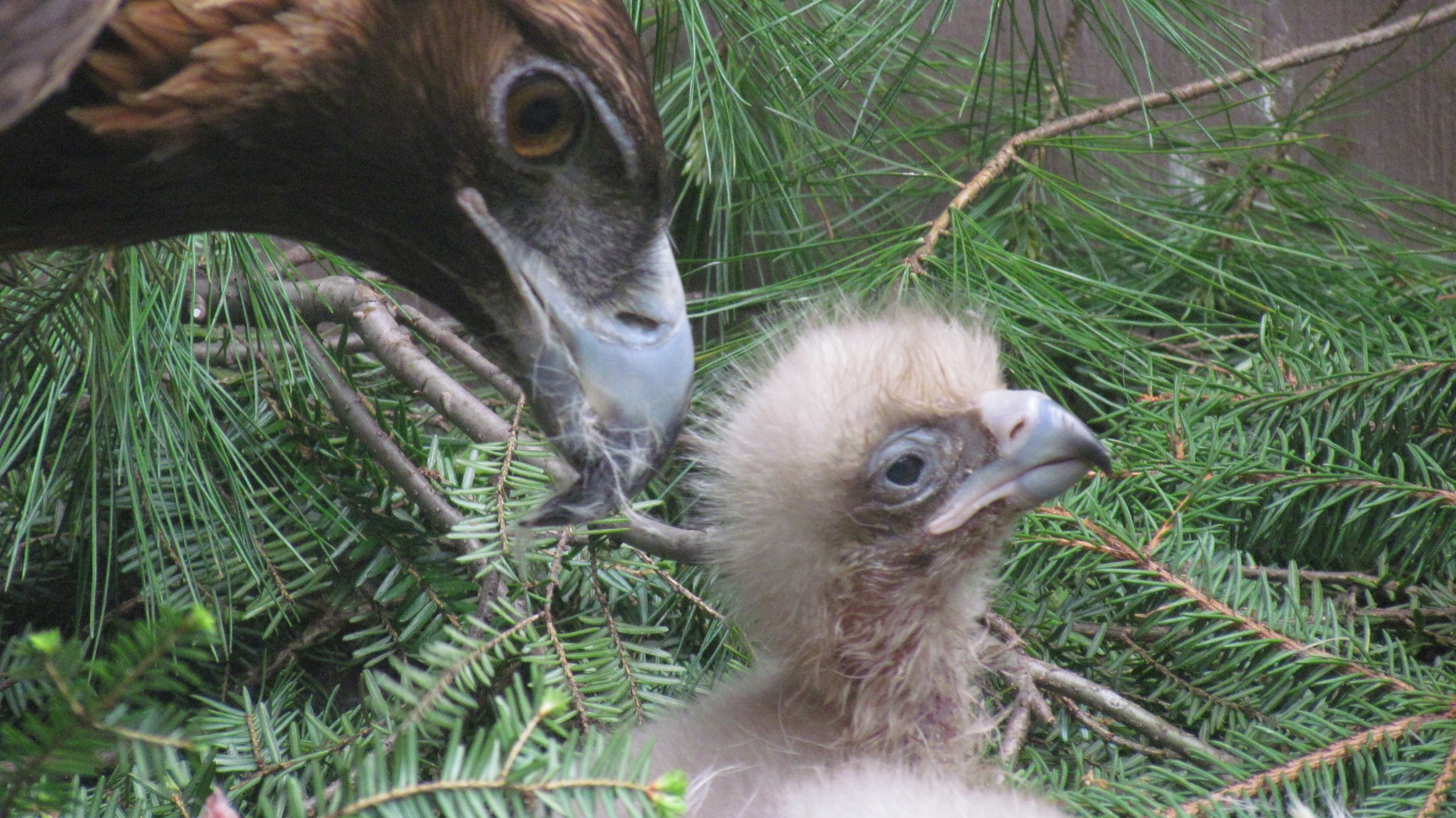 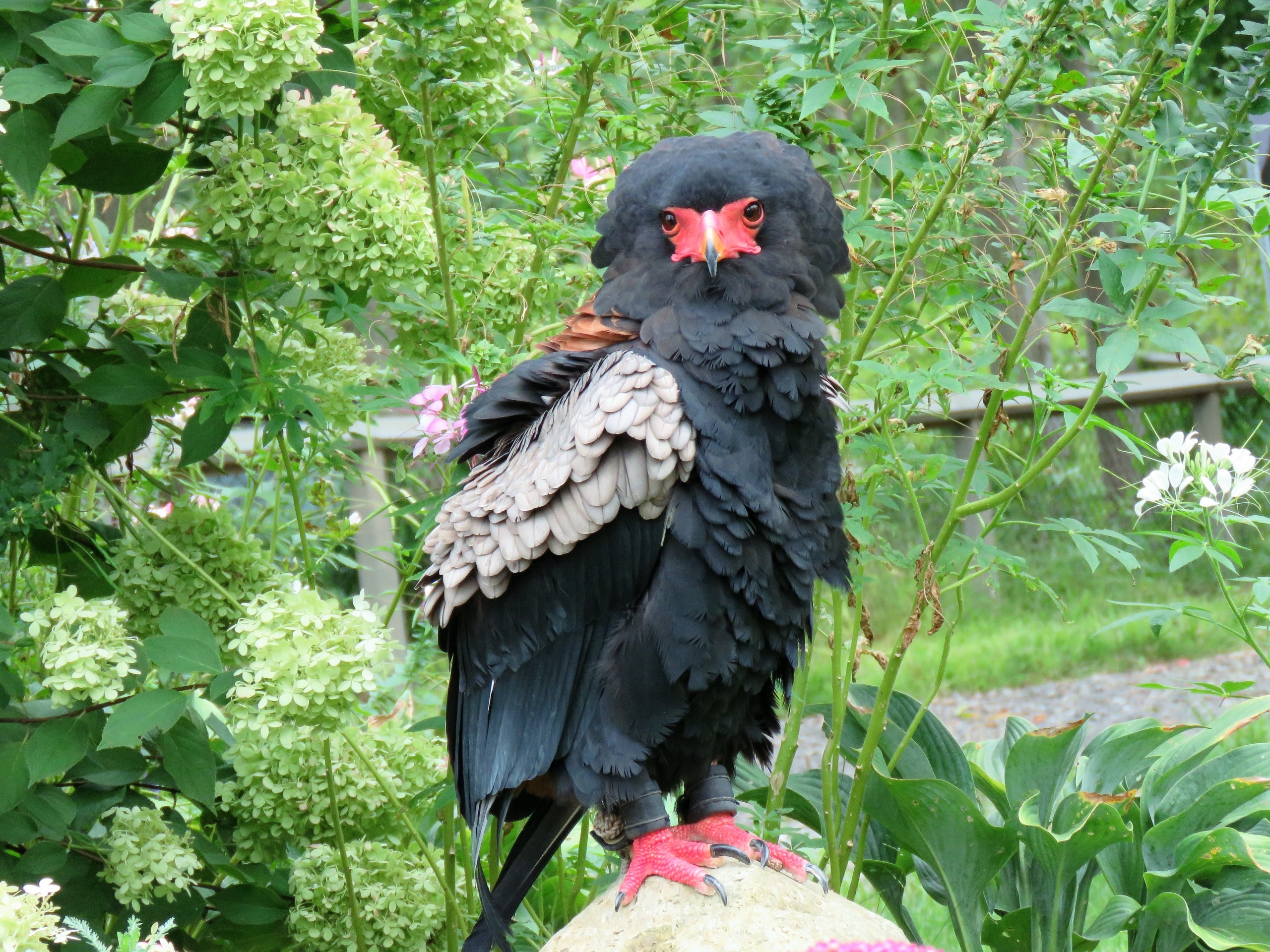 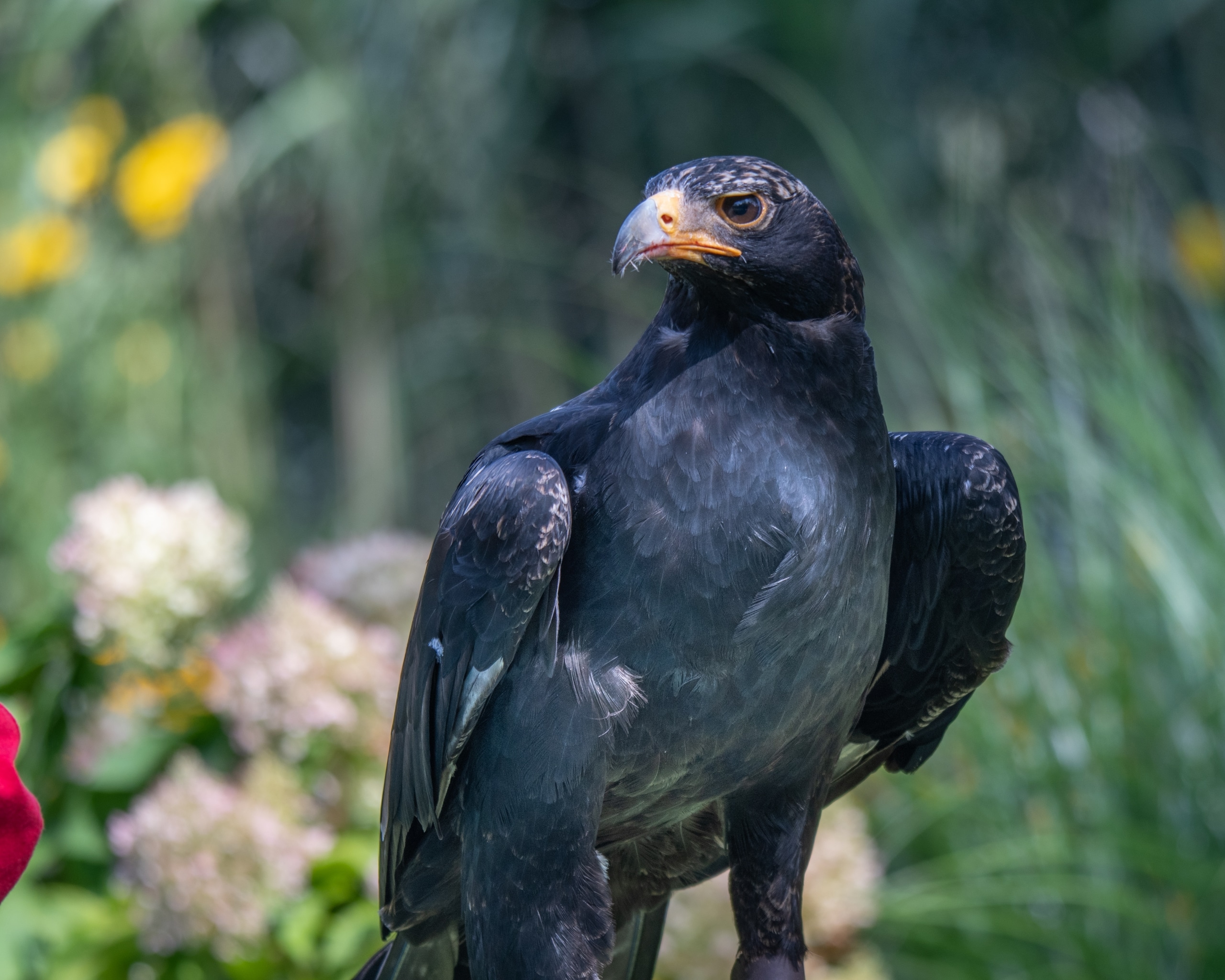 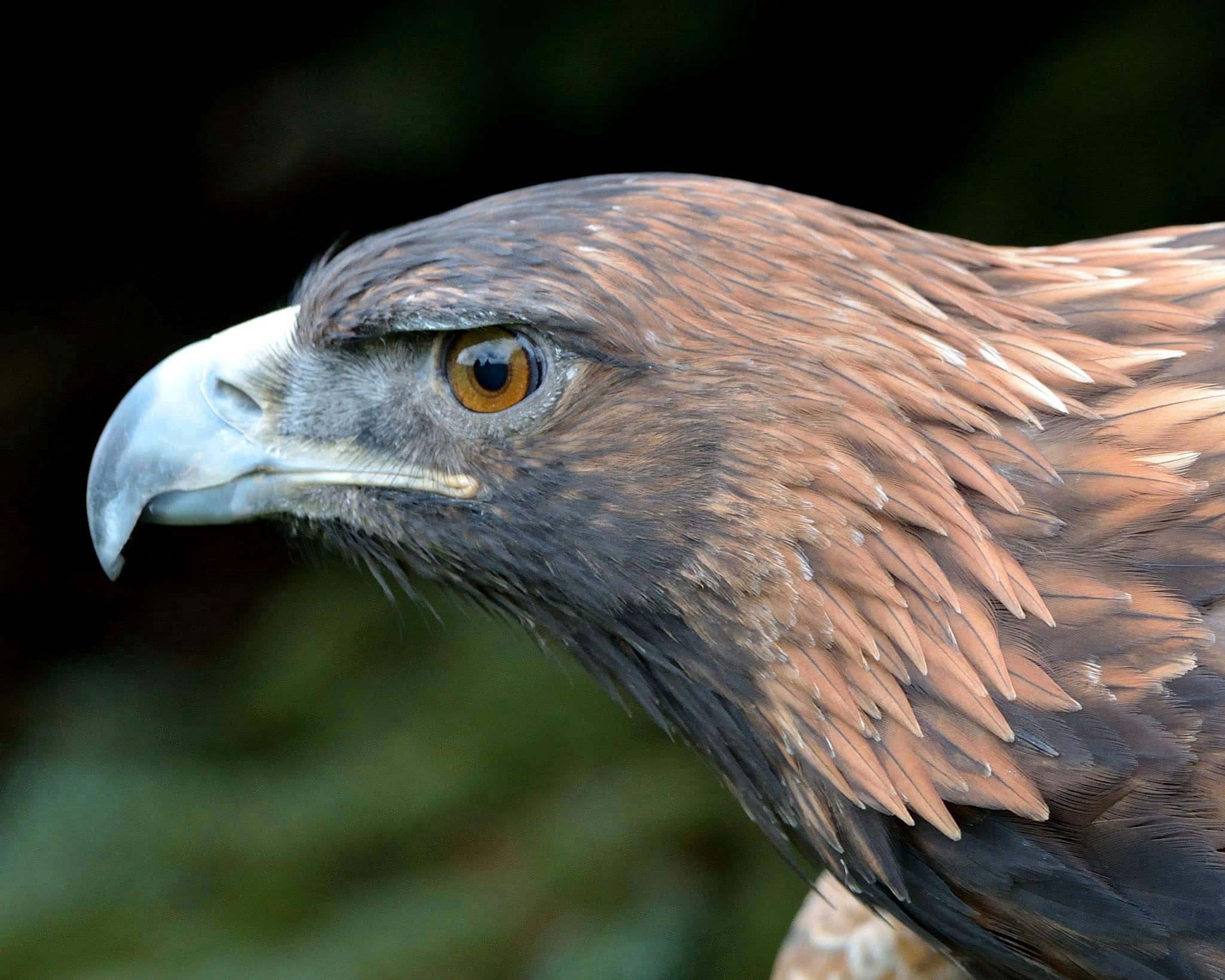 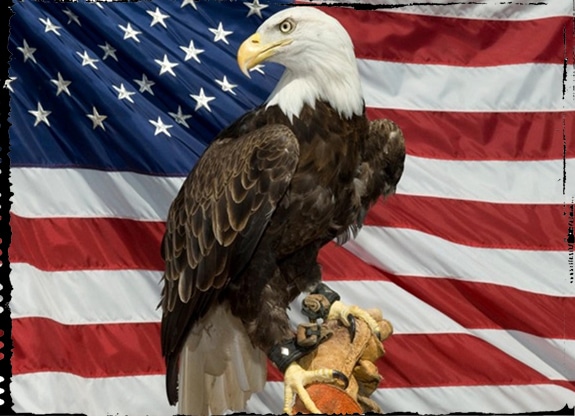 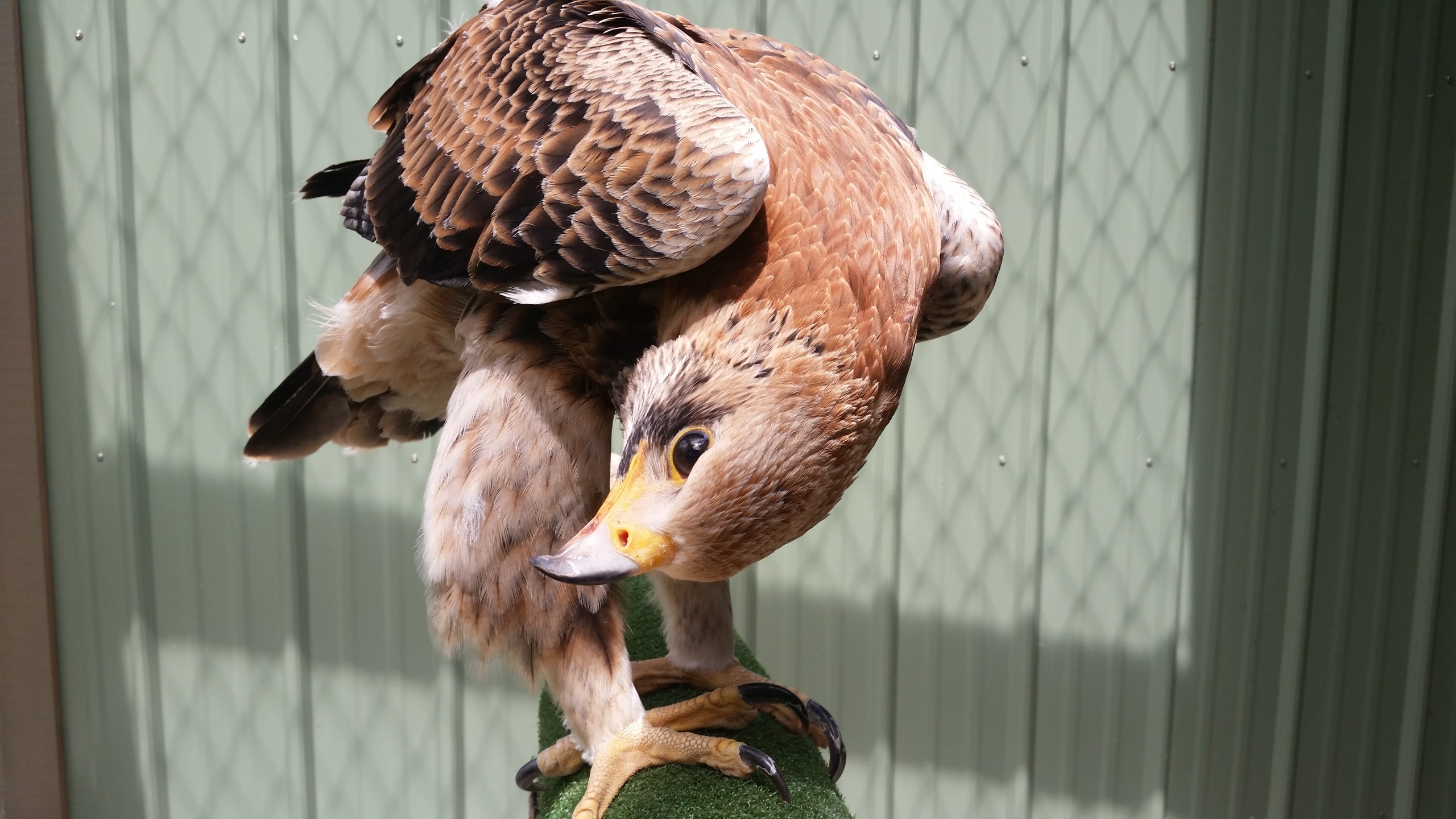 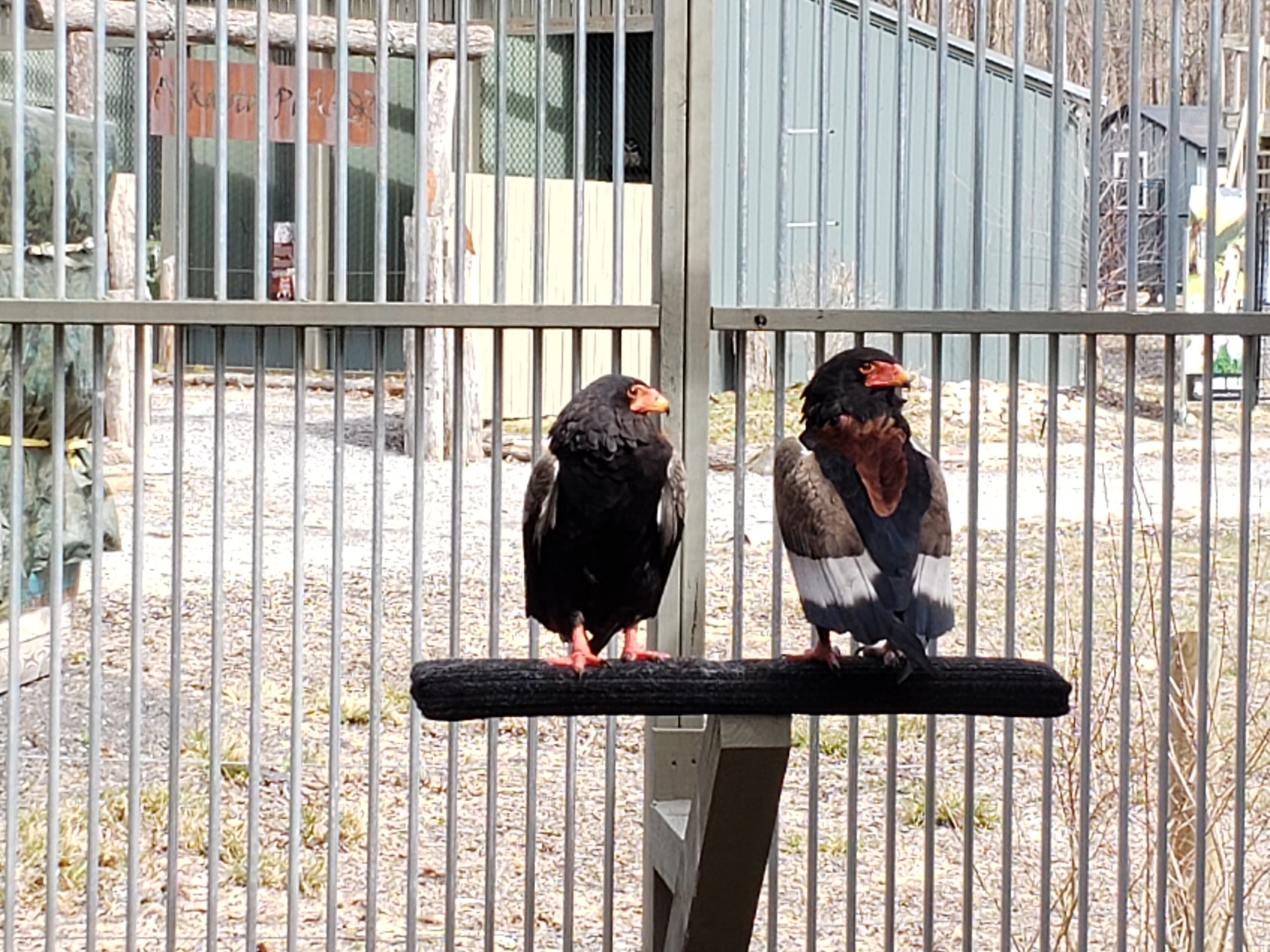