Hawk Creek was honored to collaborate with the Columbus Zoo & Aquarium to work with an incredibly unique species, Sand Cats! The genetics from these cats are vital to the global Sand Cat population since they are unrepresented in the US. Keeping genetics diverse is the best way to preserve species, both captive and wild. Through this project Hawk Creek has made groundbreaking discoveries that challenge the typical manner in which this species is housed. First and foremost, Sand Cats have typically been housed strictly indoors by most institutions. The Center believes that there is an immeasurable benefit to be had from sunshine and fresh air. Even in Buffalo, our Sand Cats have thrived when given the option to go outside when they choose, even in the snow!

More astoundingly, our two female sand cats, Nyala and Sahara, have displayed a behavior never observed and recorded in this species in captivity. Throughout the year Nyala, Sahara and Juba, the only male, are housed together and share exhibit space and indoor housing. Typically, after breeding season Juba is separated from the females if one of both begin showing indications of pregnancy. All three live together year-round (even going out in the snow) and breeding can occur throughout the year. Another common practice has been to separate the females prior to either giving birth. Sand cats are a solitary species, and little is known of their mating behaviors because of their elusiveness in the wild and rarity in captivity. Hawk Creek has made many observations since beginning the project and noticed the females often calling to each other while separated and caring for their own litter of kittens. In 2020 we decided to test the theory that the females may do well staying together during the birth process. Sure enough, not only did they live together successfully, but also co-parented! If Sahara needed a break from the kittens, Nyala would babysit and vice versa, developing their own communal care-taking system. Hawk Creek is the first institution in the world to study and record this behavior. Regardless of the zoological importance of arrangement, we are always looking for methods of increasing the quality of life for our residents and maintaining a stress-free and pleasant environment to live and thrive.

Sand Cats are the only species of felid that lives exclusively in the desert. Their geographic range can be found in North Africa, Central Asia and the Middle East. Researchers have discovered they are almost impossible to study. It took researchers from the Wild Cat Conservation Group FOUR years and FIVE expeditions to even get the chance to photograph three sand cat kittens in Morocco. You may be asking: “How is this possible?” “How are they so hard to find?” The Sand Cat has a sand-colored coat that makes it incredibly difficult to spot against the elements. They also have furry paws which mean they leave almost no footprints in the sand. During the day, they stay tucked away in their burrows, only coming out at night to hunt. If you try and spot them they will duck, flatten their ears and squint their eyes to try and stay undetected.

Habitat degradation is the Sand Cats main threat to survival. This is caused mainly by human settlement and livestock grazing. Their prey depends heavily on having adequate vegetation; no vegetation=no food. Because of this, they are classified as “Near Threatened” on the IUCN Red List. This is where we can help! Our three resident Sand Cats will be part of a breeding group. Captive breeding is critical in situations like these, and a lot of planning goes into it! When captive breeding, your goal isn’t to produce as many cute fuzzy kittens as you like, but to conserve. You want to preserve the genetic diversity that is present in the captive and wild populations. By doing this, you keep the variability in the population high, which will give the population a greater chance to survive in the wild. When a wild population is on the brink of extinction, anything could completely wipe out the species. Harsh weather, disease, or even inbreeding could result in weaknesses that the species would not recover from. This is where captive populations come into play. In order to give these animals a chance at survival, it is necessary to collect some or all the remaining wild individuals to protect them. With the captive population that is genetically diverse and the wild population that is dwindling, different facilities will try to facilitate breeding. If successful, a formal re-introduction strategy can then be devised to release the captive bred population into a semi-wild environment, then eventually into a completely wild environment to save the species! By doing this, captive facilities have saved species such as the California condor, American bison, Red wolves and the Scimitar horned oryx from the brink of extinction! We aren’t quite there yet with Sand Cats, but we are currently ensuring that the captive population is genetically diverse just in case their wild counterparts dwindle even more in the wild. 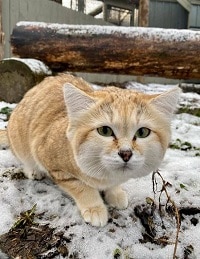 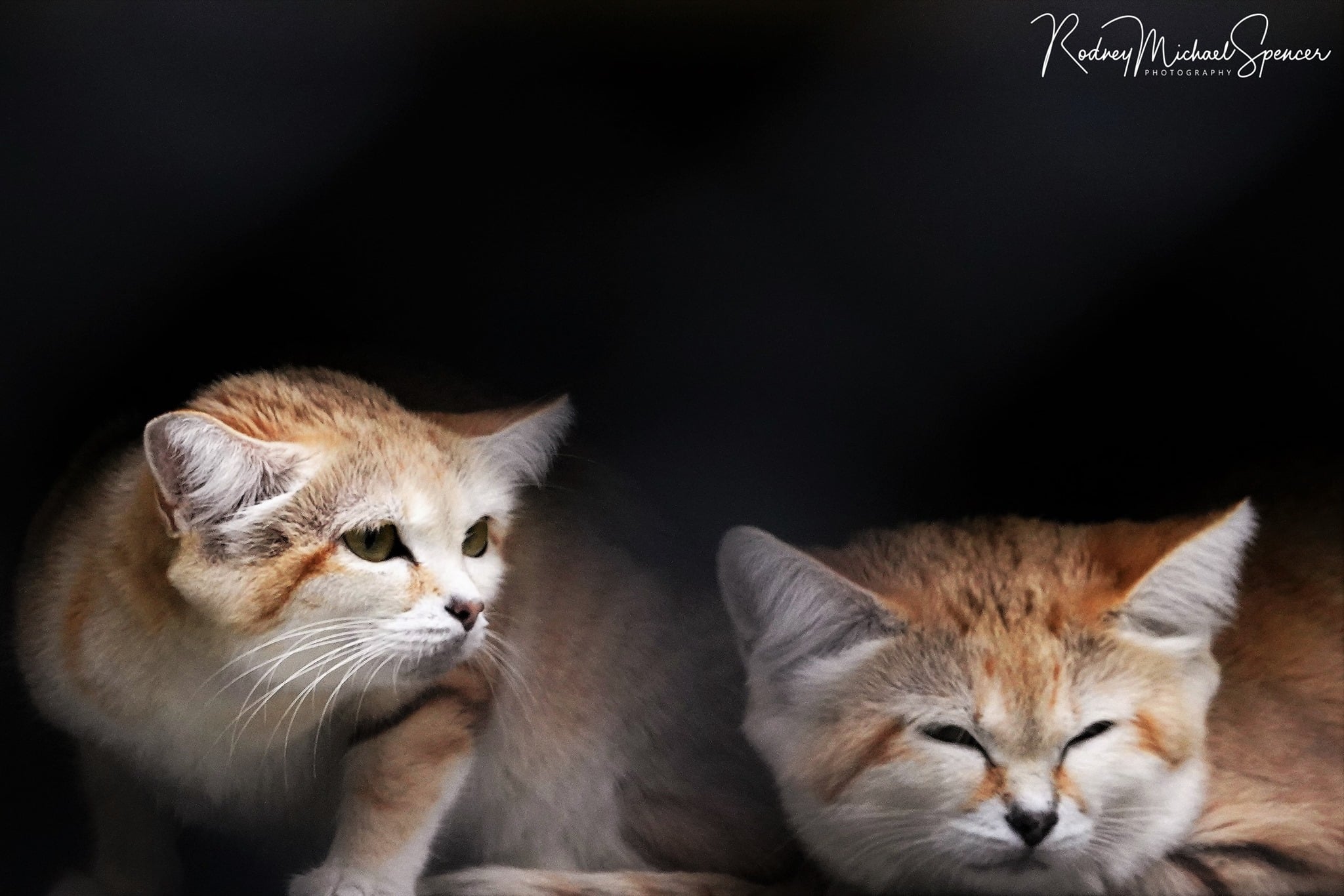 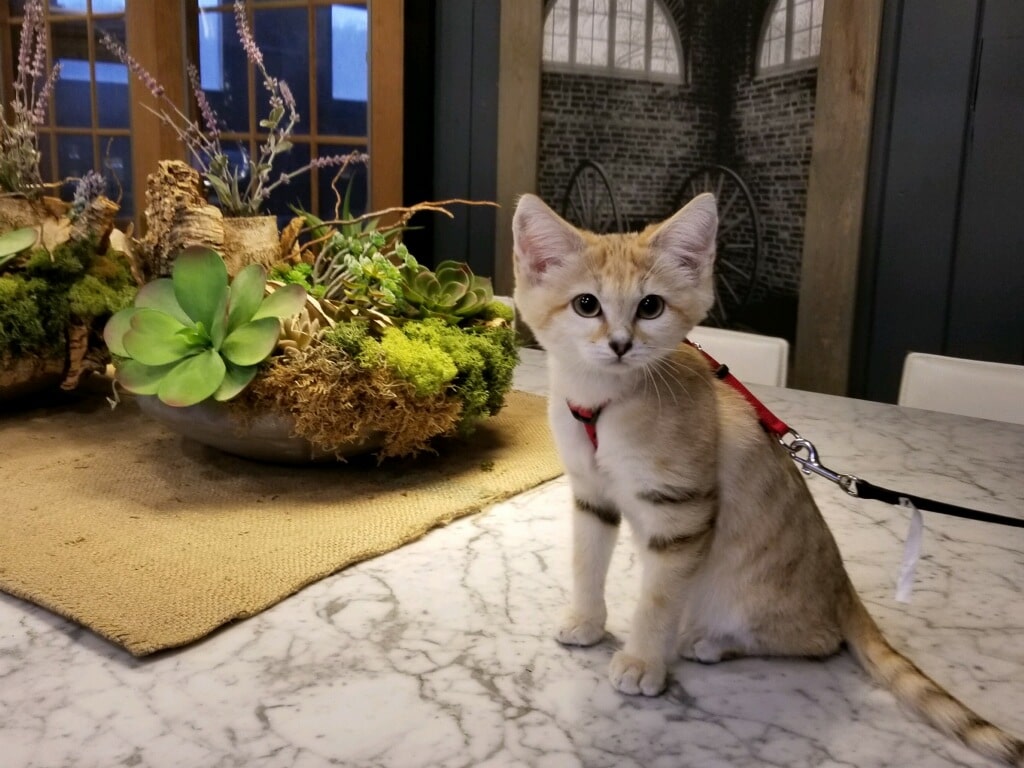