Archer was sent to the Center from one of our partners to join our small wild cat conservation and education programs. Archer’s playful and exuberant personality delights guests as they are given the rare opportunity to witness this elusive species that many people do not realize, lives in they own backyard.  Bobcats are crucial to our ecosystem as they are one of the only natural predators capable of hunting deer. 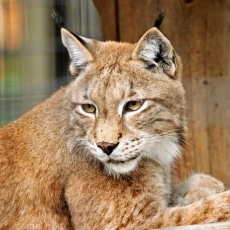 Raina, a female Eurasian Lynx, spent her youth in animal shows at Sea World educating thousands of people about the importance of predators. Due to her incredible personality and genetics the decision was made to retire her to a breeding program. Raina enjoys playing with her mate and showing off for guests but her favorite job is being a mom! We are fortunate to have formed a strong bond with Raina to the extent that she allows us to enter her den to check on the health of her kittens! 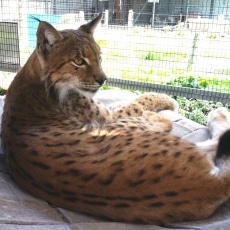 Turk is a stunningly spotted male Eurasian Lynx that was sent to Hawk Creek to become a founder for our Eurasian Lynx breeding program in 2015. Prior to being paired with Raina, Turk traveled with Jack Hanna and Jarod Miller across the country as an ambassador for lynx conservation around the globe. He has been featured on shows such as The Early Show and the Today Show.

Tracker was born at Hawk Creek as part of our wild cat conservation program.  He enjoys traveling to educate people about the importance of conserving apex predators—especially the overlooked smaller species of wild cats. Conservation works— Eurasian Lynx were an endangered species with only 700 cats left in the wild between 1930 and 1950. Due to many reintroduction projects since the 70s, their population has increased tenfold! 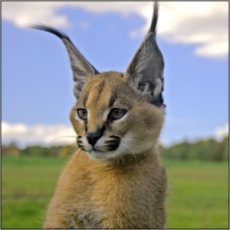 This male caracal’s parents were rescued when they were kittens in South Africa. Caracals move their young every day to protect them from predators. Khan’s mother was seen being dropped and abandoned when she was disturbed. While caracals are considered endangered in parts of their range, in South Africa, they are treated as vermin, so Khan’s parents could not be released back into the wild. Instead, they were shipped to a breeder in the US to promote education about this rare and magnificent species. 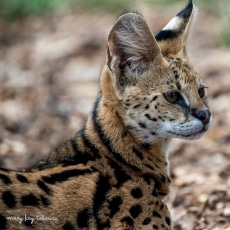 Zane has a lot of personality packed into a small package! This male African Serval is growing into his role as an ambassador for wild cat conservation. His favorite activities include playing in tall grasses, affectionately head butting the legs of his trainers and playing with the hose during cleaning. The serval’s large ears and long legs make them adept rodent hunters in their habitat of the grasslands in Africa, but Zane seems content to just hunt grasshoppers on his walks! 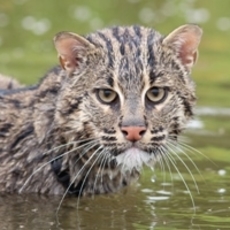 This Fishing Cat was sent to Hawk Creek to become an ambassador for her endangered species. River has a lot of personality packed into a small package! Unlike many cats, she adores water and plays in it all the time, jumping, diving, splashing and chasing her toys around in it. She especially loves to put her face under the water to reach things that sink! The Fishing Cat Conservancy has collected her DNA to become the genetic blueprints for her species. 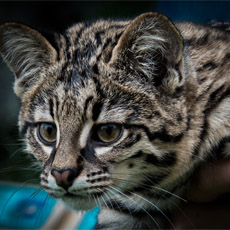 This female Geoffroy’s Cat came to Hawk Creek to become an ambassador for disappearing small wildcats. Of the 40 species of wildcats in the world, most of them are small felids that are little known and rarely studied. Mesa’s playful personality and antics help us to inspire people and educate them about the dire need for small wildcat research and conservation. See some of her kittens on Secrets of the Zoo, episode 4! 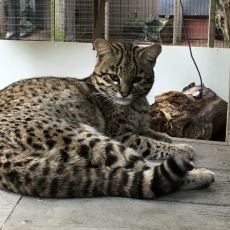 Picchu was sent to Hawk Creek to be mate and companion for Mesa. Geoffroy’s Cats are the second most hunted cats in the world for their fur. With Hawk Creek’s breeding program, we can help keep these beautiful cats from going extinct. Picchu became a successful father in 2017 and continues to produce offspring with his mate Mesa every year. Their offspring are sent to other educational facilities to teach the public about these elusive small wild cats and their importance in the environment. 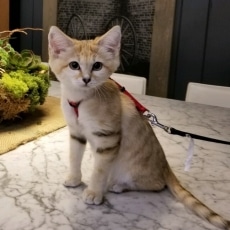 Dune & RA were born here at Hawk Creek to proud parents Juba and Sahara. They are confident, sassy, and love to talk to every person and animal they meet. These unique felines are a part of Hawk Creek’s Sand Cat outreach program and are the first recorded Sand Cats in the world to be trained as outreach ambassadors! Hawk Creek is honored to be pioneering the research of this species’ potential to educate people about their understudied kind!

Juba, Sahara and Nyala were rescued from war-torn Sudan in Africa. The wars in Sudan have had devastating effects on wildlife, especially the difficult to study Sand Cat. Studying this trio is vital to understanding more about Sand Cats and how they can be better protected in the wild, especially during this time of war. They love being outside on warm weather days and cuddling together on the brisk ones. Hawk Creek is happy to have these elusive cats and help in conservation efforts to conserve their wild cousins.

Welcome! We cannot wait to see you at our 2021 events! Note: Center only open for events & scheduled experiences. Covid guidelines in place. Dismiss